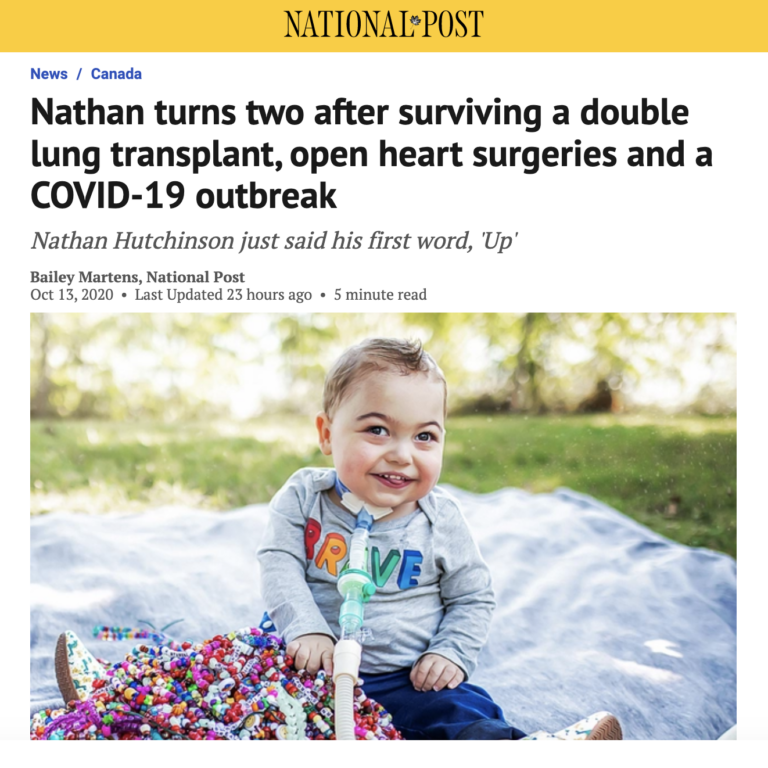 In March, two-year old Nathan Hutchinson stopped breathing in his Courtice, Ont. home. He was transported to SickKids Hospital ICU, an all-too-familiar place for Nathan and his family, in the midst of a pandemic. He would remain there on and off until mid-May.

Nathan was diagnosed with a rare heart condition, Supracardiac Total Anomalous Pulmonary Venous Return, at birth. Since then, he has spent almost half his life — 300 days — in the hospital where he has had two open-heart surgeries, spent four days on life support, and received a double-lung transplant.

“We were just basically putting Band-Aids, with procedures and heart catheterization building, and it wasn’t working. It was actually progressing faster,” his mother Crystal Costante told The National Post.

But, instead of getting better, Nathan experienced postoperative complications, keeping him in the SickKids ICU from his transplant date of August 26, 2019, until March 18, 2020. By March 25, he was back and remained in and out of intensive care until May 11. 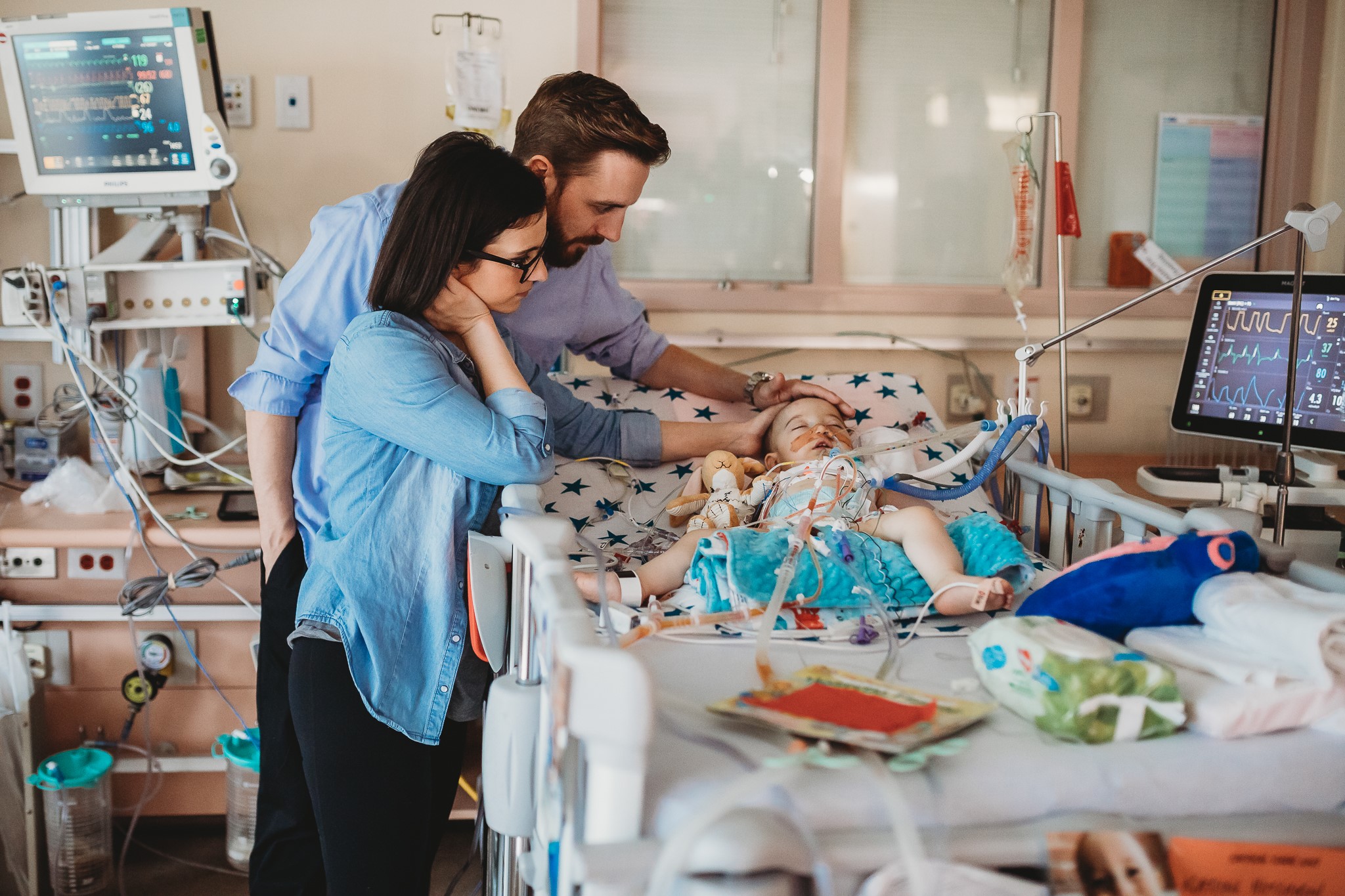 Nathan Hutchinson, who turned two years old on October 14, 2020, has spent over 300 days — nearly half of his life — in the hospital for frequent admissions. He spent almost a year cumulative sleeping in a hospital bed while his parents, Crystal and Justin, waited anxiously by his side. During this time at SickKids Hospital in Toronto, Nathan underwent two open-heart surgeries, six catheterizations, spent four days on life support and received a double-lung transplant. This is Nathan’s transplant story.

The Hutchinson family lives about an hour outside of Toronto with their dog, Baxter. Crystal and Justin were so excited to be expecting their first child. After a very healthy pregnancy, Crystal gave birth on October 14, 2018. Immediately, they knew something was wrong. “Nathan was born blue and not breathing. He was taken away right away. We never got to hold him or touch him. We hardly even got to see him. Nathan was taken to the NICU and soon after was transferred to SickKids. The first time we met Nathan, he was on life support; that memory is still one of the hardest,” Crystal remembers.

In March, the world changed as COVID-19 swept around the globe. This was an incredibly difficult time for the family as they managed the stress of the pandemic and Nathan’s medical needs without the support from their family and friends.

Nathan was placed on an ECMO machine to provide cardiac and respiratory support almost immediately after his birth and remained on it until October 18. Nathan was diagnosed with a very rare and critical heart condition called Supracardiac Total Anomalous Pulmonary Venous Return. This condition affects how the pulmonary veins return oxygen-rich blood from the lungs to the heart. He underwent his first open-heart surgery to treat this condition on October 26 and would undergo a second on December 5.

On November 2, 19 days after Nathan was born, Crystal and Justin were allowed to hold their child for the first time.“When we were waiting to hold Nathan, we were actually scared to. Not because we were afraid of doing something wrong or hurting him but because we knew we would fall completely in love with him. He was really sick, and we weren’t sure if he would ever make it home. The day we held him our nurse wasn’t having any of it. She said we’ve waited long enough and she’s putting him in our arms. Our fears came true, we fell hard and never looked back. We didn’t care what his future held. From that moment on we weren’t letting go.”

Nathan later developed a very progressive form of Pulmonary Vein Stenosis, a disease with no treatment or cure. This disease thickens the walls of the pulmonary veins and blocks them from bringing blood from the lungs back to the heart. The family’s only option was a double-lung transplant. On August 19, Nathan, who was 10 months old, was listed for a double-lung transplant.

Crystal and Justin remember these first ten months as being full of challenges. “Nathan’s first ten months were hard. He would cry all the time, he hardly slept. He would have meds, feeds and cares every two hours including the night. He is also our first baby, so we were dealing with being first-time parents at the same time. It was exhausting and there were times when I felt like I couldn’t get through the days. We were in constant fear of what was going to happen. We knew we were living on borrowed time, a lung transplant was not something we were thinking about until Nathan was 9 months old and we knew that even finding lungs for his size were very rare. Despite all this though, we loved him as hard as we could.”

Seven days later after being listed, at 7 pm, the family received the call that there was a set of lungs available, and Nathan would be undergoing a transplant. After a successful surgery, Nathan became the 7th infant in Canada to receive a double-lung transplant.

Despite a successful transplant, Nathan became very sick post-transplant. As Crystal remembers, “Transplants in general are difficult. Our journey was more difficult than anyone expected. We almost lost Nathan; he had many complications after his surgery. As parents we really struggled mentally, we still do. It’s not easy watching your child’s health decline. It took a toll on our relationships and family, but we couldn’t give up. We choose to “smile.” This was important to us as we didn’t want Nathan to see us struggle. We needed to lead by example. Once we accepted our journey, it was easier for us to move on. It was still hard, but we needed to stay strong for Nathan. We took it one day at a time and celebrated our wins and good days.”

SickKids is the only hospital in the country that performs pediatric lung transplants, which meant the family had to relocate to Toronto for Nathan’s medical care. Given Nathan’s uncertain health status post-transplant, both Crystal and Justin took leaves from work, which impacted them financially. Their social worker at SickKids told them about the David Foster Foundation, as did other families they connected with at the hospital whose children required transplants. The Foundation assisted the family with expenses including food, mortgage, car payments, gas, and cell phone bills while Nathan fought to recover post-transplant. The family says that “if it wasn’t for the David Foster Foundation, our biggest struggle would have been our finances. They took care of all the financial things we couldn’t and helped keep our family together. We couldn’t have gotten this far without them.”

Post-transplant, Nathan remained in the ICU, where only two caregivers could be present. Nathan and Crystal spent most of their time at SickKids alone. “As much as we wanted family at our side for support, it would have taken us away from Nathan and he needed our support the most. It was difficult, hard and lonely,” Crystal revealed. “We had to leave our dog behind; he thought we abandoned him. We spent Nathan’s first birthday with the staff at SickKids and we spent Christmas by ourselves.” 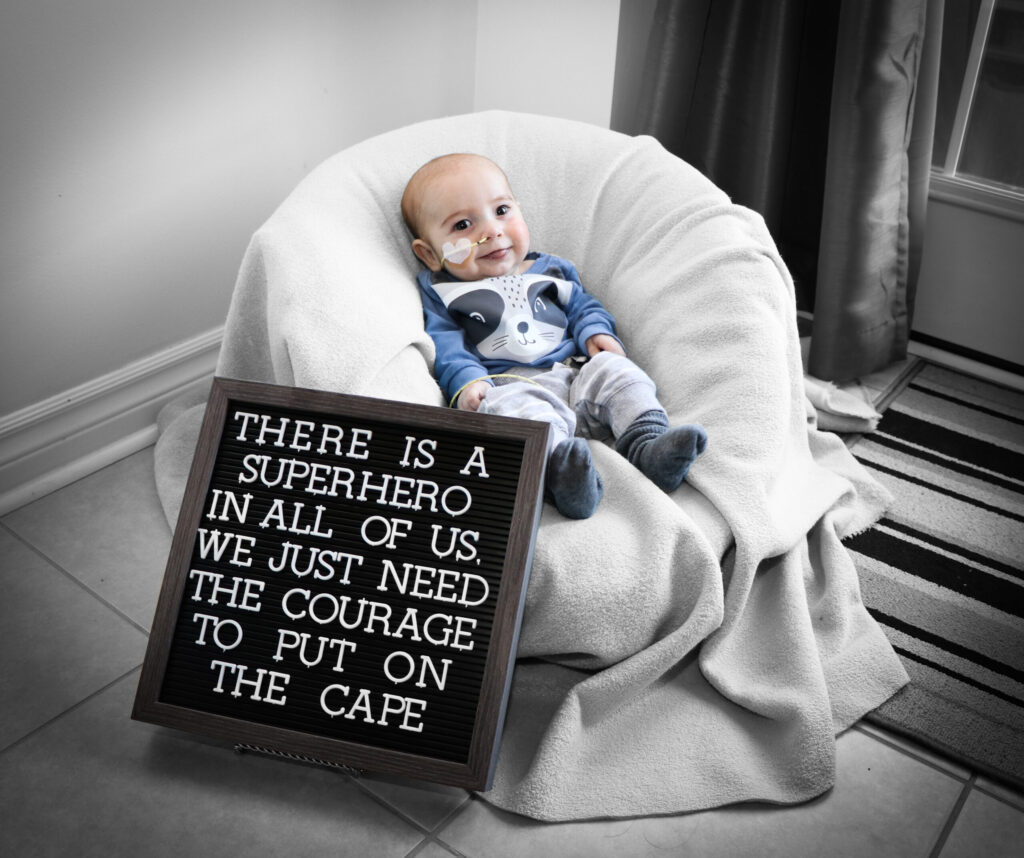 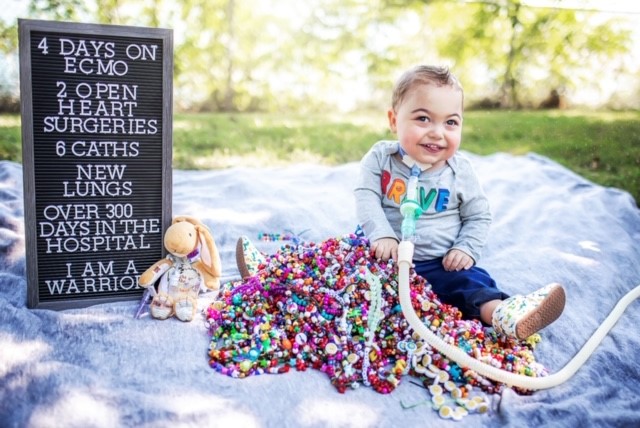 In March, the world changed as COVID-19 swept around the globe. Nathan was still an in-patient at SickKids. The hospital restricted access to one caregiver to try to mitigate the risk of exposure to COVID-19. This meant that Crystal and Justin were even more isolated as Justin went home and Crystal stayed to care for Nathan. This was an incredibly difficult time for the family as they managed the stress of the pandemic and Nathan’s medical needs without the support from their family and friends.

On July 15, the family was finally able to return home for good. Nathan has a tracheostomy tube connected to a ventilator, which helps him breathe due to complications. The family does not know if Nathan will ever not need the tracheostomy tube, “some doctors believe it’s possible and some don’t think he will. Nathan has a lot of complications and having just one of them can have him trached for life. After Nathan’s transplant, we found out his diaphragm became paralyzed, probably the main reason he got the trach. Over many months he miraculously got use of just the left side. There is almost no chance he will get use of his right side. We can only hope as he grows older and his lungs grow stronger, he can be trach free. It’s ok if he doesn’t though. We wouldn’t be here today if he didn’t have his trach. I’m just going to have to educate as many people as I can about him and most importantly, I’m going to teach him how to find his ability within his disability.”

Nathan still requires 24/7 care and nursing support. He needs to take daily medications to keep his new lungs from being rejected. The family has constant speech, physio and occupational therapists at their house to help Nathan progress his development after his lengthy stay in ICU. But as Crystal notes, “Before transplant, Nathan wasn’t even able to gain weight, he was so sick, and now he is just thriving. Despite everything, he’s the happiest human I have ever known. He doesn’t know any different. He’s learning and growing just like we had hoped. Some days he even just blows us away with how quickly he is catching up. He spends his days chasing his dog around the house and I spend my day chasing him around with his vent! He’s worth every sleepless night and we would go through this journey again for him.”